Dogs, just like humans, are susceptible to many eye diseases such as cataracts, glaucoma, and many other lens disorders. The eyes are very sensitive organs, and they are vulnerable to outside factors. Genetics has a big role in eye disease occurrence. A cataract occurs when the lens becomes cloudy. This usually happens genetically, but it can also happen in the case of trauma, strong inflammation, and diabetes. This can result in partial or complete sight loss. It’s one of the leading causes of blindness. Cataracts can be treated with a surgical procedure unless your dog has some other health conditions that increase the risk of postoperative complications.

There are four stages of cataracts:

At the early stage, usually, there are no visible changes in the lens. Sometimes, small white dots can be seen. Sight begins to be slightly blurry and eyes are more sensitive to light.

Eyes in the premature stage are much more sensitive to light, and the lens begins to be cloudier and opaque. At the mature stage, vision is blurred and the lens is completely opaque, and you can easily see the whiteness.

The hypermature stage is the last stage where the lens starts to wrinkle and mineralize, and the lens can move from its position. Dogs can use their other senses like hearing and smell to compensate for the loss of sight, and it can be a problem for dog owners to notice it in the early stage.1Gelatt, K.N., VMD, DACVO. (June 2018) Disorders of the Lens in Dogs. MSD Veterinary Manual. Retrieved 13 August 2020. Glaucoma can occur at the mature stage of cataracts.

What Causes Cataracts in a Dog’s Eyes?

There are many causes of cataracts. Some of them are hereditary, which is the most usual reason for dogs. Dogs with diabetes are very susceptible to getting cataracts at some point, even if their diabetes is under treatment. Cataracts can also develop after some eye injuries, for example, if the dog gets into a fight or has an injury with a sharp object.

Age is also an important factor in the development of cataracts. Cataracts are more common in older dogs because as the dogs get older, proteins start to accumulate in the lens. 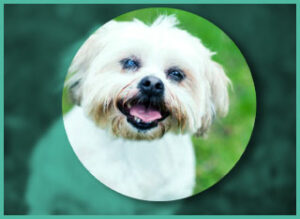 Usually, the owners notice cataracts in the immature stage, where the whiteness of the lens is more visible than in the early stage. You might notice that your dog is reacting to brighter light and sometimes has problems with coordination in the room and difficulty walking, jumping, and climbing the stairs.

Blindness can be noticed by the owner if the cataracts are present on both eyes (bilateral cataracts). Dogs with cataracts have a tendency to scratch around the area of the eyes because of the pain.

Cataracts are often mixed with lenticular or nuclear sclerosis. The difference between these two is that lenticular sclerosis is a normal process, which affects older dogs. Symptoms are very similar; the lens has a bluish opacity.

Dog Breeds That Are Prone to Cataracts

More than 100 breeds are predisposed to cataracts. Dogs of all ages and breeds can develop cataracts, but the most susceptible breeds are:

Regardless of the dog breed, dogs with diabetes are more predisposed to getting cataracts.

It is harder to notice symptoms at the early stage of the cataract. In the beginning, eyes can become slightly cloudy or owners can notice small cloudy dots in the dog’s eye. Sometimes dogs can scratch their eyes because of the pain, and it might lead to eye injuries. After the progression of the disease, the opacity of the eye is easier to notice, and dogs can lose sight.

The first symptoms of dog cataracts are:

After this, the next stage is total blindness, where the dog relies on other senses, it is depressed and has a difficulty moving around. 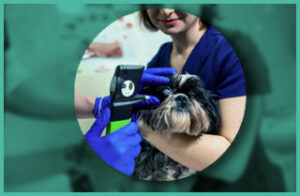 If your dog is diabetic, it’s important to let your veterinarian know that. This is very important piece of information, because dogs with diabetes have around an 80% chance of getting cataracts. The veterinarian will perform the ophthalmology exam after the proper anamnesis has been taken.

Treatment for Cataracts in Dogs

NSAID drugs can be administered orally or topically (directly on the eye). Surgery, if possible, is the best treatment option. If your dog is not a good surgery candidate, you will have to give anti-inflammatory eye drops every day, to make the dog’s life easier. Unfortunately, some dogs become blind, but with proper care, they can have a good life.

The main goal of the surgery is the removal of the cataract through a small incision. The best time for the surgery is in the immature stage. If the lenses are perforated, surgery is recommended immediately.

Surgery should be avoided if the dog has other eye diseases such as lens-induced uveitis, glaucoma, and retinal detachment because of the changes in intraocular pressure; there is a greater risk of postoperative complications.3Johnson K. (2017). Blackwell’s five-minute veterinary consult canine and feline, sixth edition, 2016. The Canadian Veterinary Journal, 58(9), 974.

How Much Does Dog Cataract Surgery Cost?

The price of cataract surgery varies from clinic to clinic. It depends on the location of the clinic, staff, gear, etc. It usually varies from $2000 to $5000.

Risks and Complications of Cataract Surgery

Cataract surgery is a very sensitive intervention. If not done correctly and without necessary precautions, it can lead to many complications, such as the following:

To minimize the risks, the veterinarian must be sure that the dog is a good candidate for the surgery, and that means that the dog can safely undergo the surgery with minimal risk of postoperative complications. Some of the conditions that can affect the outcome of the surgery are glaucoma, uveitis, and retinal displacement. 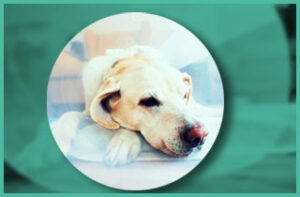 After the surgery, when you bring your dog home, you should minimize his movement and avoid exercise, and filthy and dusty areas. The dog will have to wear an Elizabethan collar for protection to avoid any contact with the eyes and to prevent scratching. You will have to give medication to your dog, prescribed by a veterinarian, such as NSAIDs in the form of eye drops and orally. If you have trouble with the application of eye drops at home, you can ask a friend or a family member to help you.

Good hygiene is very important in aftercare because it minimizes the chance of infections. The healing process lasts around 2 weeks. You will have to take your dog to the veterinarian for the control exam after 2 weeks, and after that, you will have to go annually for the rest of the dog’s life.

In post-operative care, your dog will be given antibiotics, and you will have to apply eye drops and oral NSAIDs. In the matter of supplements, your dog will have to receive vitamins such as vitamins C, E, and especially A because it prevents eye infections, loss of sight, and helps with regeneration.

Lanosterol, in the form of eye drops, has shown to be effective in some cases of cataracts. Lanosterol is a naturally-occurring steroid. There was a case in China, where the siblings had a congenital form of cataracts, but their parents were not affected. The research has shown that the siblings had a mutation, which stopped the natural production of the lanosterol, which was not the case in their parents.

The researchers believed lanosterol might stop the defective crystallin proteins from grouping up together to prevent cataracts. Some lab tests were done on human cataracts, and the analysis has shown the size reduction of cataracts. Finally, the eye drops were tested on dogs with naturally occurring cataracts, and just like the human lens in the lab, the dog responded positively to the drug. Severe cataracts have been shrunk away to nothing, or almost nothing.4(July 23, 2015). Scientists Have Developed an Eye Drop That Can Dissolve Cataracts. Science Alert. Retrieved 14 August 2020.

Food rich in omega-3 fatty acids have shown to be beneficial during treatment and after surgery. Also, your dog should take vitamins A, C, and E in the form of pills or through food.

In some cases, in the early stages, it is possible to slow further cataract progress, and in some cases, to even stop it. This is rare, but you can try it by giving your dog vitamins (A, E, C), coenzyme Q 10, and omega-3 fatty acids. You can give these supplements through food, or you can consult your veterinarian for other possible ways.

How to Prevent Cataracts in Dogs?

There is no known and effective way to prevent cataracts. You can take some precautions, for example, if your dog has diabetes, take it to the veterinary center for an eye exam every few months. Also, you can buy dog food rich with vitamins (A, E, C) and omega-3 fatty acids, which is found in fish.

If you notice that your dog has different color eyes than before, and if you suspect that your dog doesn’t see as well as before, especially if a cloudy area is present on his eyes, don’t hesitate to take your dog to the veterinarian, because there is a chance of preventing further development of the disease. If your dog has diabetes, make sure to take it to regular ophthalmology exams every few months, because dogs with diabetes are more prone to this disease.

Do Cataracts in Dogs Lead to Blindness?

In most cases – yes. Cataracts can be the cause of blindness if not treated in time. If you see some irregularities in the eyes of your dog, you should take your dog to a veterinarian for an ophthalmology exam.

Can Dogs Have Cataract Surgery?

Definitely yes, if your dog is a good surgery candidate. It is considered to be the best treatment for cataracts. If you want to learn more about this topic, see the section 'Cataract surgery for dogs.'

How Much Does Cataract Surgery for Dogs Cost?

Can Dog Cataracts Come Back After the Surgery?

Cataracts do not come back after the surgery, because the natural lens is removed, and an artificial one is inserted.

How to Cure Cataracts in Dogs Without Surgery?

Lanosterol is shown to be effective in cataract treatment in some cases. Still, surgery is the best option.

What Happens When a Cataract Goes Untreated?

In most cases, blindness is the final stage of an untreated cataract.

Dr. Benjamin Razic (DVM)
Dr. Benjamin is a young, ambitious veterinarian, working in a busy regional vet station in Travnik. He is interested in animal virology and is locally engaged in animal rights. Benjamin also has a certificate in surgical support, anesthesia monitoring, canine welfare, and hospitalization. He has a mixed-breed dog he has found on the streets.