Pancreatitis is an insidious disease that can cause your dog great trouble. The inflamed pancreas can have a sudden onset, also known as acute pancreatitis, with a potentially fatal outcome. The inflammation can also be chronic, with some more subtle clinical signs and not such drastic consequences. Vomiting, loss of appetite and taking a “praying position” are some of the main signs that appear in dogs with pancreatitis. Since the main cause is not entirely known, there are some predisposing factors, such as consuming high-fat foods and hormone imbalance. Keep reading to find out more about the other factors that increase the risk of pancreatitis, as well as how to treat pancreatitis in dogs.

What Is Pancreatitis in Dogs?

Pancreatitis in dogs briefly means the pancreas is inflamed. The condition itself is not simple and can be very dangerous and even life-threatening.

Let us first look at the pancreas as an organ and its function. The pancreas is located in the abdomen, and it has a great role in producing enzymes that help in breaking down food; in particular, it helps to digest proteins, carbohydrates, and triglycerides, ultimately providing nutrients for the sustenance of the whole body. Thus, any disturbance in the function of the pancreas can have a great impact on the general health status of your pet.

In a properly functioning pancreas, the enzymes are activated only when they reach the small intestine. When a dog has pancreatitis, the enzymes get activated as soon as they are released, which results in the inflammation of the pancreas and consequently, in some cases, damage to other organs and the surrounding tissue. This premature activation of the enzymes can even cause the pancreas to digest itself.1Straus, M. (October 13, 2008). Canine Pancreatitis. Whole Dog Journal.

Pancreatitis can occur in two forms: acute and chronic. Both can result in mild or severe signs and symptoms.

Acute pancreatitis is characterized by a sudden onset, and in the majority of cases, the symptoms are severe. This form of the disease can lead to systemic inflammation in a short period of time, followed by cardiovascular shock and sudden death. This is why an immediate and fast reaction, even with only the slightest suspicion of the disease, is very important.

Acute pancreatitis can have stages ranging from mild to edematous and even to a hemorrhagic form with severe symptoms.

Chronic pancreatitis, unlike the acute form, is a result of ongoing inflammation that is not as severe. It progresses throughout a long process of low inflammation intensity. Consequently, vomiting and loss of appetite can occur. However, in many cases, this condition is subclinical, meaning there are no apparent signs showing the occurrence of the disease. Sometimes the dog just becomes a picky eater, skipping meals periodically.

Symptoms of Pancreatitis in Dogs 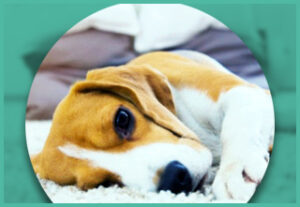 There is a wide range of symptoms a dog can show when having developed pancreatitis. As said, the condition can be acute or chronic. In both cases, the symptoms can vary from mild to more severe.

The onset of symptoms in acute pancreatitis progresses very fast, hence the condition gets more severe. The most common clinical signs you should look for in your pet are listed below:

When it comes to chronic pancreatitis, the symptoms are not as apparent and can be very subtle. The pet may start to refuse some foods or have no interest in playing as he usually does. There is even a possibility for no symptoms to be shown at all. However, vomiting can be noticed, followed by weight loss and depression. Sometimes, flare-ups can occur as well, which can consequently result in acute pancreatitis.

It is important to pay great attention and track any possible changes you see in your dog so further complications can be avoided.

What Causes Pancreatitis in Dogs?

The root cause of pancreatitis in dogs is unknown, and the condition usually develops suddenly, without any previous indications. However, there are some factors that increase the risk of developing this inflammatory disease. The most common is eating food high in fat (especially table scraps), even more so when combined with low-protein food. Eating trash and other inappropriate non-nutritional things can also contribute to the development of the disease.

Some other factors associated with pancreatitis are surgeries, trauma, the use of certain drugs (phenobarbital, estrogen, l-asparaginase, thiazide diuretics, salicylates) irregular adrenal gland function (hyperadrenocorticism) and high-fat levels in the blood.

The following dog breeds are more likely to develop pancreatitis:

Diagnosis of Pancreatitis in Dogs 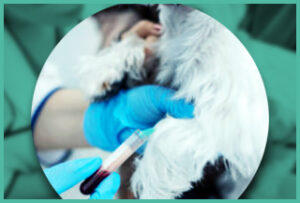 As the symptoms of pancreatitis are not as specific, the diagnosis is also not easy. Usually, a combination of several methods are used.

It is important to share with your vet the comprehensive history of the disease, after which he will conduct further examinations. These include a clinical examination, a blood test, a urinoculture, X-rays, and an ultrasound. Some of these tests are used to rule out other possible conditions.

There is now a snap test available: the canine-pancreatic lipase immunoreactivity (cPLI) test, which is used to measure the enzyme lipase, which gets elevated in dogs that have pancreatitis.3Ruaux, C., Steiner J. Canine pancreatic lipase immunoreactivity (cPLI) test. Vetstream. However, abnormal quantities of this enzyme do not always mean that the main and only cause of the clinical symptoms developed is pancreatitis. Nevertheless, this test contributes to making the final diagnosis.

The most accurate way to set a final diagnosis is to perform a biopsy. The problem is just that in most cases, the health condition of the dog is bad, so they are not able to undergo the anesthesia that is required for that kind of action.

As the initial cause of pancreatitis is usually unknown, the treatment is also mostly just supportive.

Switching to a low-fat diet, so the load on the pancreas is reduced, is usually recommended in mild cases of this disease. This is followed by regular monitoring of the condition, thus the possibility of further complications can be minimized.

When it comes to more severe cases, it is recommended for the dog to be hospitalized so that he is under constant vet supervision. If there is vomiting and diarrhea present, giving food and water by mouth is restricted. Intravenous fluids and electrolyte support are given together with medications for nausea, painkillers and stomach protectants. Sometimes, antibiotics are also included to prevent secondary bacterial infections.

There are some supplements containing pancreatin that can be beneficial in releasing the load on the pancreas, thus helping the pancreas to recover after acute or chronic pancreatitis.

Before introducing these probiotics to your dog’s diet, make sure to consult your vet.

How to Prevent Pancreatitis in Dogs?

Measures for preventing pancreatitis in dogs include reducing high-fat foods and ensuring your dog gets proper and quality nutrition. If your dog is an at-risk breed, make sure to do the monitoring regularly, and if there is any sign that could indicate pancreatitis, contact your veterinarian as soon as possible.

As the inflammation of the pancreas can be life-threatening, great attention should be given to this disease. Coming in both acute and chronic forms, where both can range from mild to severe conditions, the most common symptoms in pancreatitis are vomiting, loss of appetite and taking a “praying position.” The difficulty with this disease is the fact that it can be subclinical as well, meaning no apparent symptoms show.

Diagnostic methods carried out when pancreatitis is suspected include various tests, from blood examinations to ultrasound and measuring the special pancreatic enzyme (cPLI test).

Since the real causative agent of pancreatitis is unknown, when it comes to therapy, it is rather supportive where intravenous fluids and electrolytes are being given, followed by a specific diet. More details about treatment are given in the section “Pancreatitis Treatment in Dogs.”

The outcome of the disease varies, where in severe cases, it can end up fatal or with consequences such as organ failure if it wasn’t treated in time. In other cases, the dog can recover fully. Pay attention to your dog’s behavior, and if you notice any anomalies mentioned in the section “Symptoms of Pancreatitis in Dogs,” make sure to contact your veterinarian as soon as possible.

How to Treat Pancreatitis in Dogs?

Treatment in mild cases is based on restricting the dog’s diet to low-fat food, followed by continuous monitoring of the condition. While in more severe cases, hospitalization is usually required where the dog is given intravenous fluids together with electrolytes as well as nausea and pain-relieving medications.

What Foods Can Cause Pancreatitis in Dogs?

The most common food associated with pancreatitis in dogs is a food high in fat, as well as food low in protein combined with the intake of high-fat food. In many cases, pancreatitis can occur after having a large high-fat meal in one sitting (usually table scraps).

What Toxins Cause Pancreatitis in Dogs?

The use of some drugs, including potassium bromide for seizures, are some of the toxins that can trigger pancreatitis. Further, it has been recorded that phenobarbital, estrogen, l-asparaginase, thiazide diuretics as well as salicylates can predispose the dog to develop pancreatitis.

How Long Does Pancreatitis Last in Dogs?

This varies individually and is different for every case. But usually, in the case of mild pancreatitis, dogs can recover from up to 3 days to one week after treatment. While in more severe cases, the recovery lasts longer and the dog can even get hospitalized. This can last one week or longer.

Is Pancreatitis Fatal in Dogs?

When acted on time with proper treatment, especially in mild cases of pancreatitis, the condition is not fatal. However, if the disease progresses too fast, there is a great possibility for it to result in great consequences and even be fatal.

Dr. Iman Krijestorac (DVM)
Dr. Iman is a young, ambitious veterinarian working in a small animal vet station while volunteering in the local dog shelter. Zoonotic and infectious diseases are one of her major interests, together with dog nutrition and diet for which she attended several seminars and conferences. She has always had a heart for big dogs, she has an old Appenzeller Sennenhund going by the name "Yoda".