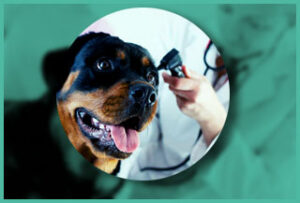 The Rottweiler is a breed of working dogs that originated in southern Germany in the 19th century and were primarily bred to drive cattle. It is believed that the first Rottweiler came to the United States in the 1920s, and the popularity of this breed increased after World War II.

Due to their characteristics and nature, Rottweilers later began to get engagements in military, customs, and police work. They also proved to be good family dogs and protectors, although many have the opposite opinion.

Do Rottweilers Have Health Issues?

Although Rottweilers are strong and healthy dogs, they can have certain health issues. Below is a list of diseases that have been reported in this breed over the years. The list is not arranged according to any special criteria, which means that there is no higher risk of developing health issues that are at the top of the list and vice versa.

The health issues that have been reported in Rottweilers over the years are the following:

The purpose of this list is to inform Rottweiler owners about health problems that could potentially occur in these dogs. This doesn’t mean that these health issues will definitely occur in your pet, but it’s good to know what to look out for when it comes to your dog’s health. There are a few things you can do to keep your pet as healthy as possible.

Although it’s not possible to predict whether and when a dog will get ill, by purchasing Rottweiler puppies from responsible breeders it’s possible to reduce the risk of certain diseases.

Rottweilers gain weight easily, so they need a certain amount of physical activity every day, at least in the form of a half-hour walk. In order to stay in good shape, in addition to physical, they also need mental stimulation.

Rottweilers enjoy performing a variety of exercises and tasks that give them a sense of accomplishment. They will do almost anything you ask of them, but if you neglect these dogs and don’t set them any tasks, they will find a way to have fun on their own, mostly by digging holes in the yard or biting furniture.

Quality nutrition and regular visits to the vet also play an important role in maintaining the health of dogs.

Rottweilers are strong, intelligent dogs that many consider dangerous and unpredictable, but with the right owners, they can be very obedient and loyal. In order to achieve this, Rottweilers need to be socialized from an early age and get used to the various situations they will encounter throughout their lives.

People often decide to get a Rottweiler because of its attractive appearance, but that’s the wrong approach. Those who have never had a dog before should skip the Rottweiler and opt for another breed. A Rottweiler needs a consistent and solid owner who will know how to teach him to listen and to keep him under control.