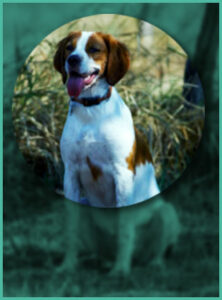 The Brittany Spaniel is a breed of working gun dogs that were originally used for hunting wild animals and birds. Early socialization and obedience are very important for these dogs because they are prone to persistent roaming and barking. The average life expectancy of Brittany Spaniels is about 12 years.

Although they are being called Brittany Spaniels because of the breed’s character traits that are similar to Springer Spaniels (both of them are affectionate, gentle, and loyal pets), when it comes to working features Brittanys have the most similarities with Pointers.

These dogs are two-colored; in combination with the white color of the coat, one of the following three can be found: black, brown, and orange. Brittany Spaniels are great at retrieving things or prey, they are also playful, energetic, obedient, and good pointers and swimmers. Since they are quite enthusiastic, Brittanys are most suitable for hunting, where there’s the opportunity for them to spend all that energy.

Do Brittany Spaniels Have Health Issues?

Brittanys are generally healthy dogs, but like most other breeds they are prone to certain health issues, like canine hip dysplasia for example. Some other health issues can also occur in Brittany Spaniels, and below is the list of the most common health problems that have been reported in this breed.

The health issues that have been reported in Brittany Spaniels over the years are:

Although Brittany Spaniels are prone to developing the aforementioned diseases, this doesn’t necessarily mean that these health issues will certainly occur in your pet, but it’s good to be aware of them.

Although it’s not possible to predict whether and when a dog will get ill, by getting Brittany Spaniel puppies from responsible breeders it’s possible to reduce the risk of hereditary diseases.

Since these dogs are predisposed to the development of ear canal infections, due to the anatomical structure of their ears, it is necessary to dry their ears well after bathing and take good care of them in general. What you can do to keep your Brittany Spaniel as healthy as possible is to maintain the good hygiene of their paws, ears, eyes, and teeth. You should also take them on regular walks, train them, and provide them a food that is proper for their age.