Lyme disease (Lyme Borreliosis) is one of the most common tick-transmitted diseases in the US. The disease is caused by the Borrelia Burgodrferi bacterium carried by a tick (usually a deer tick). It is transmitted into the bloodstream via a tick bite. It takes about 24-48 hours for the tick to feed on the dog and for the bacterium to be transmitted successfully. In spring and fall, the risk of a dog catching the disease is at its highest level. Even though the disease is present all over the US, there are certain risk areas, such as the upper Midwest and the coast along the Northeast. Symptoms are present in 3-10% of dogs that come in contact with an infected tick. In that case, usually a high fever, lameness and swollen lymph nodes are present. The treatment can take a very long period of time, especially if not diagnosed in the early stages. This is why it’s important to be cautious and to take all the preventive methods that we will recommend further in this article.

Symptoms of Lyme Disease in Dogs 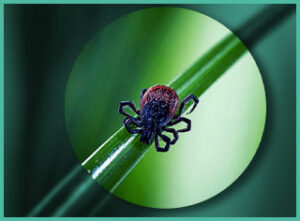 There are several ways that Lyme disease can be manifested: Lyme arthritis, Lyme nephritis, as a neural form and the form where the heart is affected, but this is very rare.

The most common symptoms are high fever, followed by lethargy, fatigue, lameness and swollen lymph nodes. These are usually developed 2-5 months post-infection. Swollen joints and pain in the legs, so-called Lyme arthritis, is the most common form of Lyme disease. These symptoms can disappear after some time, or even after treatment, only to reappear again after a few months or even years.

The Borrelia Burgdorferi bacteria can attack the kidneys as well, especially in untreated cases, causing vomiting, loss of appetite and frequent urination (polyuria). Lyme nephritis, where the kidneys are inflamed, can cause kidney failure which can then quickly lead to death.

There have also been some recorded cases of neurological symptoms, such as seizures and facial paralysis. Cardiac manifestations can also occur, but they are very rare.

Is Lyme Disease in Dogs Contagious?

There are no recorded cases of direct transmission of Lyme disease from dog to human, nor from dog to other animals. The only way of transmitting the bacteria is through a deer tick. But since dogs and owners spend their time in the same places and environments, there is a great possibility for both of them to catch the disease through infected ticks. For humans, it is more likely to develop symptoms, such as the characteristic “bulls-eye” rash followed by fever, fatigue and joint and muscle pain. If either dog or the owner test positive for Lyme disease or show some symptoms related to the disease, the other one should also consider getting tested.

For the most successful diagnosis, a combination of history, physical examination and signs, together with a diagnostic blood test, is needed. The main reason is the fact that many dogs can test positive on a blood test without showing and developing any symptoms. In this case, they don’t necessarily need treatment. Other tests can also be conducted, so diseases with similar symptoms (Anaplasmosis, Babesiosis, arthritis, Rocky Mountain Fever) can be ruled out.

Treatment of Lyme Disease in Dogs 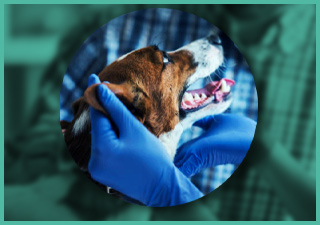 Treatment for dogs that are positive on the blood test, but don’t show any signs of the disease and are not prone to kidney failure, is usually not conducted nor recommended. Antibiotic treatment can cause other complications and disturbance in the gastrointestinal tract, and non-essential use of antibiotics can contribute to antibiotic resistance.

But for dogs that develop certain symptoms, the treatment is usually done by treating the infection itself as well as reducing and managing the associated pain.

Despite the fact that the symptoms often disappear 1-3 days after the treatment has started, for the infection to be fully eradicated, the treatment should be conducted for four weeks.

Besides analgesics, supplements containing glucosamine and/or chondroitin can also be given as an addition to the therapy for easing pain and discomfort, as well as for improving joint health and mobility. In this case, I often recommend Pup Science Hip & Joint Relief.

For other forms of the disease, the treatment method and duration is shaped according to the severity of the symptoms, the general state of the dog, the response to treatment and final prognosis. So it is usually based on supportive and fluid therapy together with diet management and medications for kidneys and the gastrointestinal tract.

In some cases, the dog can seem entirely cured, but after some time, he starts to develop kidney problems and complications associated with that. This is why, in the long run, retesting should be done periodically, so the treatment can be continued accordingly.

Prevention of Lyme Disease in Dogs

Since ticks play a major role in the transmission of Lyme disease, the best way to hinder the infection is tick prevention. This can be achieved by restricting the dog’s access to places with lots of ticks and to risk areas where the disease is more frequent. Using products that repel ticks, like collars, spot-on, and oral medication is a great way to minimize the possibility of Lyme disease, as well as other tick-transmitted diseases.

If the dog, nevertheless, gets bitten by a tick, the removal should be done as soon as possible since one day of feeding is needed for the tick to transmit the bacteria. This being said, a regular skin examination should be done for tick presence after every walk in nature. Pay special attention to the ears, inside of ears, lips, in between toes and the area around the anus and the tail.

Together with all the above-mentioned methods, vaccination is also added for some dogs, mostly in Lyme disease risk areas. This should be discussed with the veterinarian.

Lyme disease, also called Borreliosis, is caused by the Borrelia burgdorferi bacterium, and it affects dogs and other animals as well as humans. Being transmitted through a tick bite, it is the most common tick-transmitted disease in the US in the past few years. The dog can develop several forms of the disease, but mostly the bacteria causes arthritis, resulting in symptoms such as lameness, fatigue, fever and swollen lymph nodes. A combination of history, symptoms, physical examination and blood test is done for a most successful diagnosis.

Treatment is determined according to the stage of the disease and the general state of the dog. Antibiotics are usually prescribed together with analgesics and other supplements to improve the dog’s general condition. To find out more about the treatment of Lyme disease, please read the section “Treatment of Lyme Disease in Dogs”

The best way to minimize the infection risk is tick prevention: using tick repellents, avoiding risk areas, regular skin examination and removing ticks, if found, as soon as possible. Also, vaccination could be recommended. Considering the complexity of the disease, early detection and prevention is the best way to fight Lyme disease.

How to Treat Lyme Disease in Dogs?

Lyme disease can be treated in cases where dogs develop symptoms, such as lameness, fever, fatigue, and swollen lymph nodes. Antibiotic treatment with Doxycycline as the first choice is usually conducted for four weeks, despite the quick improvement of the dogs’ state and symptoms. Additionally, analgesics and other supplements can be given as well, to support the dog’s general state. Nevertheless, supervision and retesting should be done for a longer period of time, since recurrent symptoms can occur. To learn more about treatment, check the section 'Treatment for Lyme Disease in Dogs.'

Can Joint Supplements for Dogs Help with Lyme Disease?

Joint supplements can be a part of the supportive therapy, to help ease the pain and to relieve inflammation. But a veterinarian should always be consulted before taking these measures, since he is the one familiar with the whole state of the dog and with the disease’s progress

What Are the Signs of Lyme Disease in Dogs?

Just 3-10% of dogs show signs of Lyme disease. If signs are developed, usually lameness, fever, fatigue and swollen lymph nodes are present. In other forms of Lyme disease, where kidneys are affected, signs like vomiting, frequent urination and loss of appetite are seen. To learn more about the signs and symptoms, check the section 'Symptoms of Lyme Disease in Dogs'.

Can Lyme Disease in Dogs Be Cured?

Definitive recovery from Lyme disease depends on the stage when the treatment starts, how severe the symptoms are and which form develops (arthritis, kidneys or neural form). Even if the dog seems healthy after the treatment, there is a possibility the symptoms will show up again after a certain period (weeks, months or even years) of the initial infection.

What Happens If Lyme Disease Goes Untreated in Dogs?

If Lyme disease is not treated in time, there is a greater risk for the kidneys, nervous system and the heart to get damaged, resulting in a life-threatening outcome. Most commonly, kidney failure occurs.

Can Dogs Live with Lyme Disease?

Dogs can live with Lyme disease, but just in cases where the treatment started in the early stages so further organ damage was prevented. Giving the fact that the symptoms can reappear weeks, months or years after the initial infection, constant monitoring and retesting for the disease is needed.

Dr. Iman Krijestorac (DVM)
Dr. Iman is a young, ambitious veterinarian working in a small animal vet station while volunteering in the local dog shelter. Zoonotic and infectious diseases are one of her major interests, together with dog nutrition and diet for which she attended several seminars and conferences. She has always had a heart for big dogs, she has an old Appenzeller Sennenhund going by the name "Yoda".